The city of Gödöllő is located 30 km northeast of Budapest. The most notable attraction of the former royal holiday resort is the Baroque palace, named after its builder as the Grassalkovich Palace. The Hungarian state bought the palace in 1867 and gave Franz Joseph I and Queen Elizabeth the right to use the building and the park as a coronation gift. The royal suites are located in the main building, north and south of the ballroom. Elizabeth's suite was characterized by the colour of her favourite flower, violet. From the first floor, a spiral staircase led to her three-room suite downstairs, in front of which stood a wooden porch. The palace was surrounded by an English landscape garden with two swan lakes in front of the main façade.

The royal family first stayed in the Palace of Gödöllő in the autumn of 1867. From then on, they spent several months each year here, mostly in the fall and spring. The palace was the venue for all the Queen’s pastimes, if she wanted to be alone, it was possible for her to do so. She was able to read, study languages, write and take walks without being bothered. If she desired company, large-scale equestrian competitions, hunts, greyhound races and pigeon shootings were organized. The elite of Hungarian equestrian sports also visited, including the Prime Minister, Count Gyula Andrássy.

In Gödöllő, everyday life and holidays were more relaxed than in Vienna. The Queen’s name day (on November 19th), which was celebrated by locals with a serenade and torchlight procession, also fell into the autumn season. Christmas was held in an intimate atmosphere and was also a perfect opportunity for charity. The family often stayed in Gödöllő until the New Year. The Queen spent a total of 2,663 days in Hungary - of which above 2,000 days were spent in Buda and Gödöllő. Her last visit to the Royal Palace of Gödöllő was in October 1897.

After the Second World War, the main building of the palace was badly destroyed. After an extensive renovation, the palace opened its doors to the public in 1996. On the first floor you can see the restored suites of Franz Joseph I and Queen Elizabeth with the ceremonial hall. The permanent exhibition, which is reminiscent of the Baroque era of the palace, also includes the memorial exhibition of Queen Elizabeth. The restored Baroque theatre of the palace is an unique rarity in Europe. There is a cosy café and gift shop located on the ground floor. The palace is surrounded by 26 hectares of English gardens, home to many magnificent ancient trees planted during the royal period. 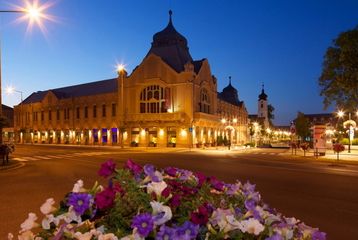 In Herend, one will find Hungary’s oldest and the world’s largest manufacturer of porcelain. The “white gold” of this manufacturer can be seen in the silver collection of the Viennese Hofburg and in Gödöllö Palace – Emperor Franz Joseph was also an admirer of Herend porcelain. Old patterns are still produced today.