Not far from Munich where Sisi was born, Possenhofen Castle, which belongs to the community of Pöcking, can be found on the west bank of Lake Starnberg. From 1834 onward, it is the summer residence of the ducal family and today it is privately owned. Here, Sisi spends carefree childhood days with her parents and siblings. Large sections of the former park are now used as public grounds for recreation and swimming under the name “Paradise.” Even as an empress, Sisi visits her beloved “Possi” (as the family referred to Possenhofen Castle) 24 times and during her visits resides in the present-day Empress Elisabeth Golf Hotel in Feldafing. The original terrace and stalls have been maintained.

The Empress Elisabeth Museum is a special attraction with a permanent exhibition in the historic imperial salon of the Possenhofen Railway Station which was built in 1865 under the rule of Ludwig II. The museum was founded in 1998 and based on a private collection. With the renovation carried out in 2009-2010, the exhibition rooms now shine in new splendor. Along with the Empress Elisabeth collection, which changes often due to the new acquisition of authentic objects, the museum also includes an exhibition about Ludwig II. Near Berg Castle, located across from Possenhofen Castle, the “fairy tale king” succumbed to a mysterious and early death in Lake Starnberg.

One can walk the path known as “Elisabeth Weg” and follow Sisi’s footsteps beginning at Possenhofen Railway Station and continuing for 10 minutes to Possenhofen Castle. In an additional 45 minutes headed south one arrives at the romantic Rose Island, the island on which the kindred spirits Elisabeth and her cousin Ludwig II spend precious hours of privacy exchanging thoughts. Rose Island and the royal villa “Casino,” which was commissioned by Maximilian II, are under landscape conservation and monumental protection today. With thousands of roses, the island is considered an insider’s tip for fans of garden design. Here, the most distinguished German garden architect of the 19th century, Peter Joseph Lenné, who also worked in Laxenburg near Vienna, implements his ideal concept of a landscape garden with the rose garden and park. A short ride on the ferry brings visitors to the island where guided sightseeing tours are offered.

From here, further excursion destinations reminiscent of Ludwig II include the Neuschwanstein and Hohenschwangau castles in Schwangau near Füssen and Linderhof Palace. 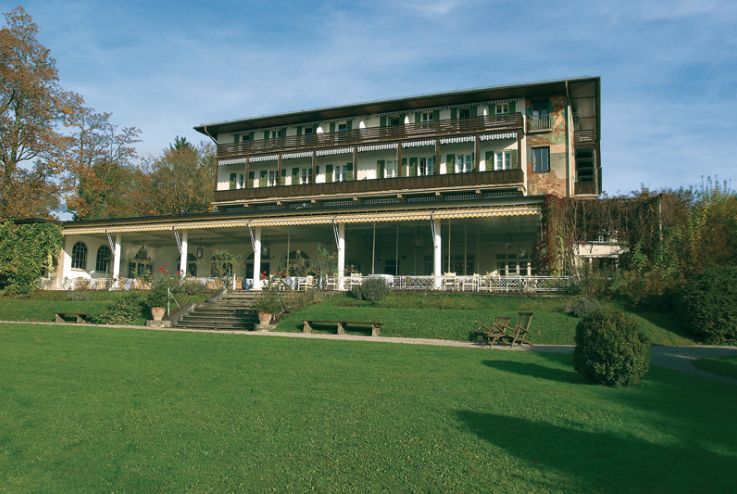 The Empress Elisabeth Museum in Possenhofen includes displays of pictures, mementos, literature and contemporary historical documents about the royal family, and exhibits centering on Ludwig II and Lake Starnberg.

We use cookies and external media to offer you the best website experience. You can decide for yourself which categories you want to allow. Please note that based on your settings, not all services on the site may be available. You can of course revoke your consent at any time by clicking on cookie settings and changing them. This does not affect the lawfulness of the processing carried out on the basis of the consent until the revocation.